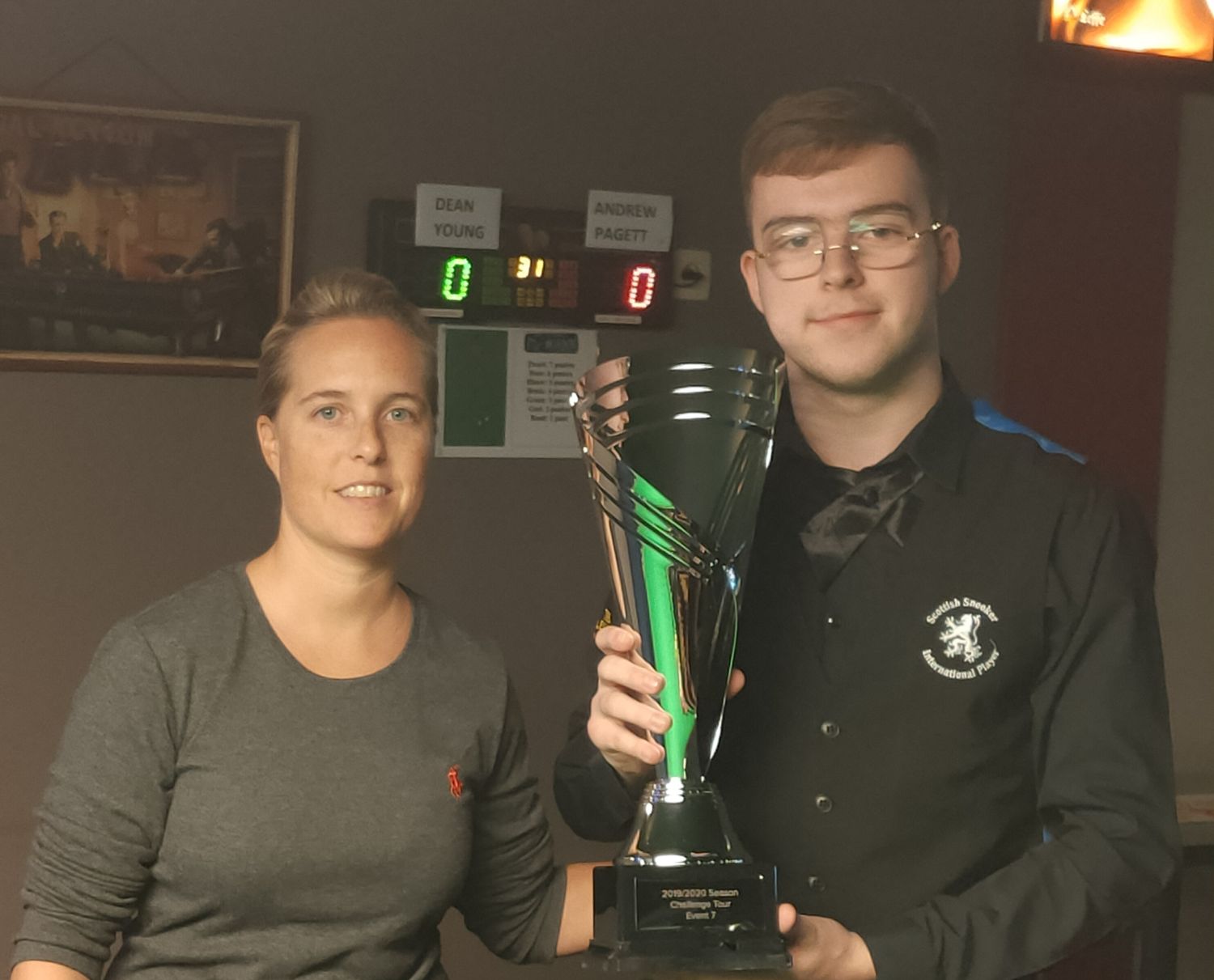 Young after winning a Challenge Tour event in Belgium in 2019.

Scotland’s Dean Young believes his stoic temperament will stand him in good stead when he makes his professional debut on the World Snooker Tour in the upcoming season.

Young clinched a two-year tour card and a maiden spell as a professional by coming through the recent Q School event in Sheffield. The Edinburgh potter was the only rookie to emerge from the brutal three-event process.

The 19-year-old has already tasted success on the circuit, having beaten David Grace and Liam Highfield to reach the last 32 of the 2020 Shoot Out. Now he is aiming for a steady first two years on the tour to solidify his status as a professional.

Dean, congratulations on your performance at Q School. First of all, how did you originally get into snooker?

“Before I first played, I had seen snooker a few times on television and I would always ask my dad about where you can go to actually do it. He thought I was too small at that point to go to the snooker hall, as I was only four or five, so he bought me a six-foot table for the living room. It all stemmed from there.

“When I was about seven my dad took me down to our local club on a rainy day and I loved it. I was just hooked from then. My dad taught me the basics like my bridging hand and things and he then got me lessons with former professional Chris Small up until around the age of 16. That helped me develop a lot.”

How big has the influence of your dad been on the whole for your career?

“Well he is a decent player himself, with a highest break of 89. He only ever played in the local leagues and things though. He would drive me all over Scotland to the different events that I played in. That would be especially difficult if I got to a final, which was normally played on a Wednesday night in Glasgow. He’s a bricklayer, so he would be back home from work, get changed and drive me over there from Edinburgh. He has been a big inspiration to me, if it wasn’t for him then none of this could have happened.”

How proud are you to be the only rookie to come through Q School?

“The field this year was so strong. When you see players like Michael White and James Cahill not getting on, it just shows you how hard it was. I played in the event for two years before this and on both occasions I did get to the last day. I’d been playing well, so I felt that if I could keep that up then I did have every chance of getting through. The feeling when I got over the line in that last match was unbelievable.”

You’ve been regularly practising with world number 34 Scott Donaldson in recent years, how much has that helped to bring on your game?

“Playing with him day in and day out has brought my game on leaps and bounds. He practised with me quite a lot before this. The advice he gave me was just to keep my head down and play my shots. He said that I was good enough to get through and that gave me a lot of confidence. He’s seen me develop over the last few years and for someone like him to say I am good enough really helped me a lot. Before Q School I was starting to get the better of him in the odd game. He hammered me for years, but I’d say recently we’ve been about even. You have to face better players to be able to improve.”

What in particular has playing against Scott helped you most with?

“Probably my temperament, which used to be really bad. He is so calm in everything he does. My temperament is one of the best bits of my game now. I actually did snap a cue years ago when I was about 12! I wouldn’t even bang the table or do anything like that now. I’ve totally changed and probably matured more than anything. If you get angry, then your opponent just feeds off it.”

What are your ambitions for the next two years?

“It is really had to stay on the tour in your first two years as a professional. That is my goal, but if I don’t I will go back to Q School. If I can stay on it would be great though.”